A few weeks ago, a friend and I did a cool thing. We ran around a mountain. Three Fingered Jack to be exact. It was an advertised 22 miles, but it ended up at 23.5. It was smooth and the views were incredible. I really can’t wait to do it again.

It is a ragged mountain that is home to a portion of the Pacific Crest Trail in Central Oregon. There are many backpackers on the trail for through hiking or a weekend adventure. But, why take several days to do something when you can see the whole thing in just one day? 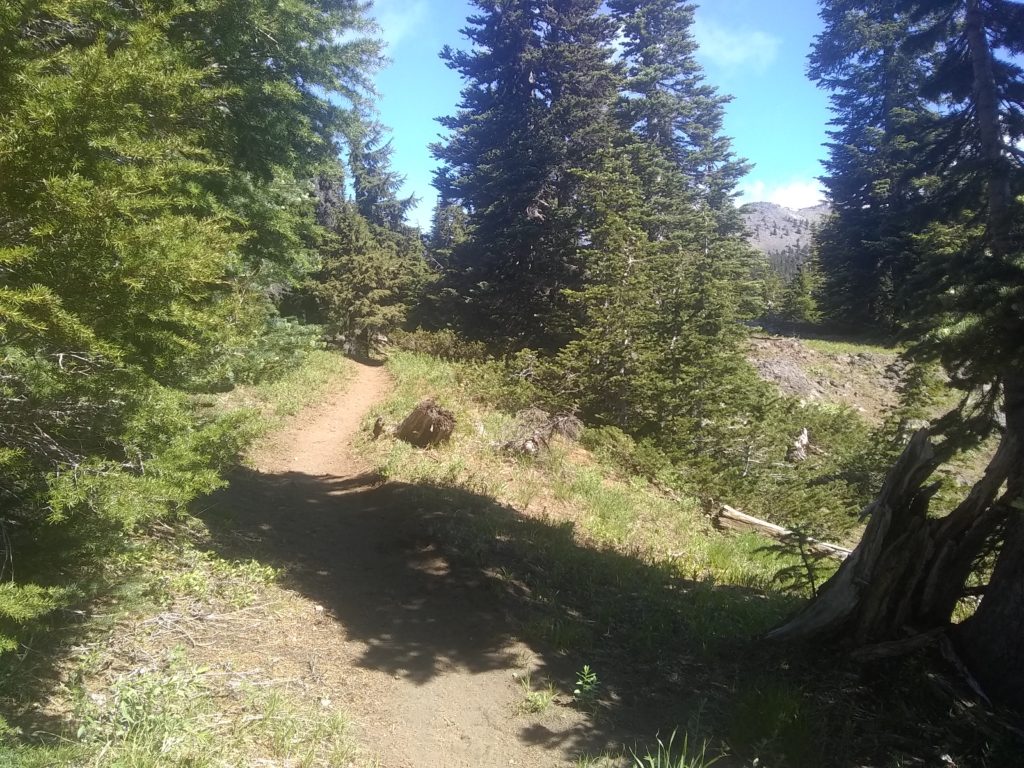 The trail begins as a smooth single track of packed dirt. It alternates between being exposed, to covered by trees, to old forest fire burn areas. 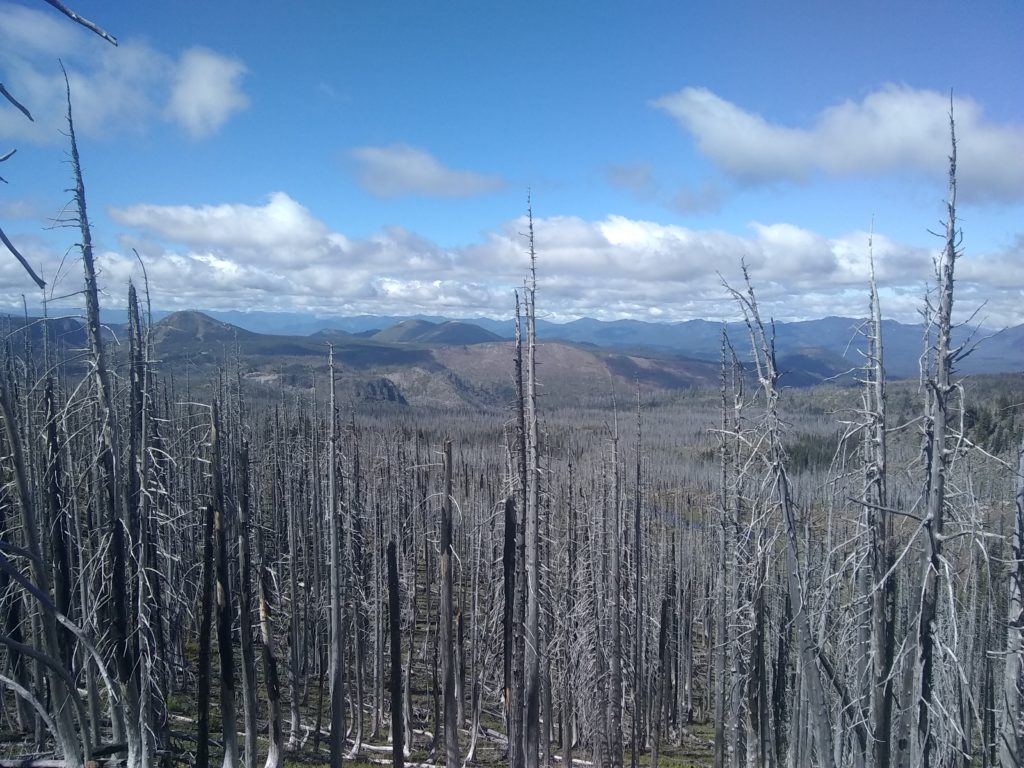 In the beginning there is a fair amount of climbing, so you are quickly greeted by views that seemingly go on forever. It is quiet and serene. We wished we were going a little faster, but we were climbing quite a bit and tried to accept our speed. 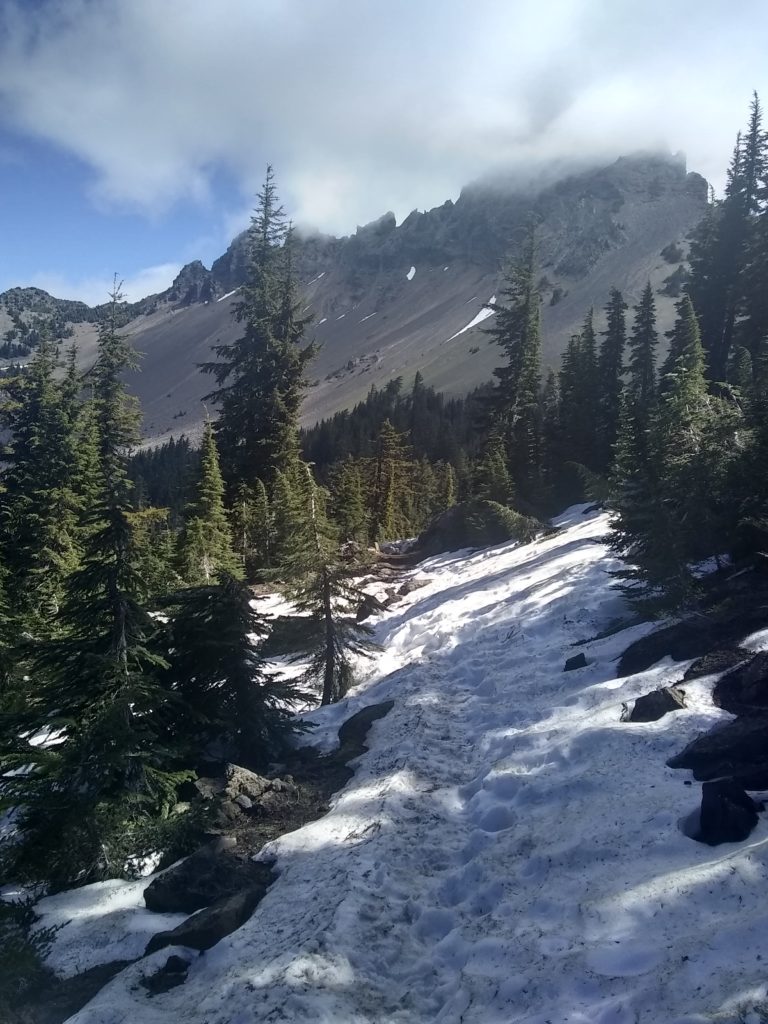 We hit snow, which made us do a double take because the last time we were on snow it was a little scary. Luckily this time we were crossing it instead of climbing up it, so it wasn’t so bad. There were some misquitoes, but on the upside, it was a nice cool break from the warmth of the sun. Then we looked up and saw the mountain in front of us. Before this moment we hadn’t seen the mountain at all. We were on it, but we had to climb and wind our way around to get a visual. These are the views that I am chasing when I decide to go for a long run in the woods. 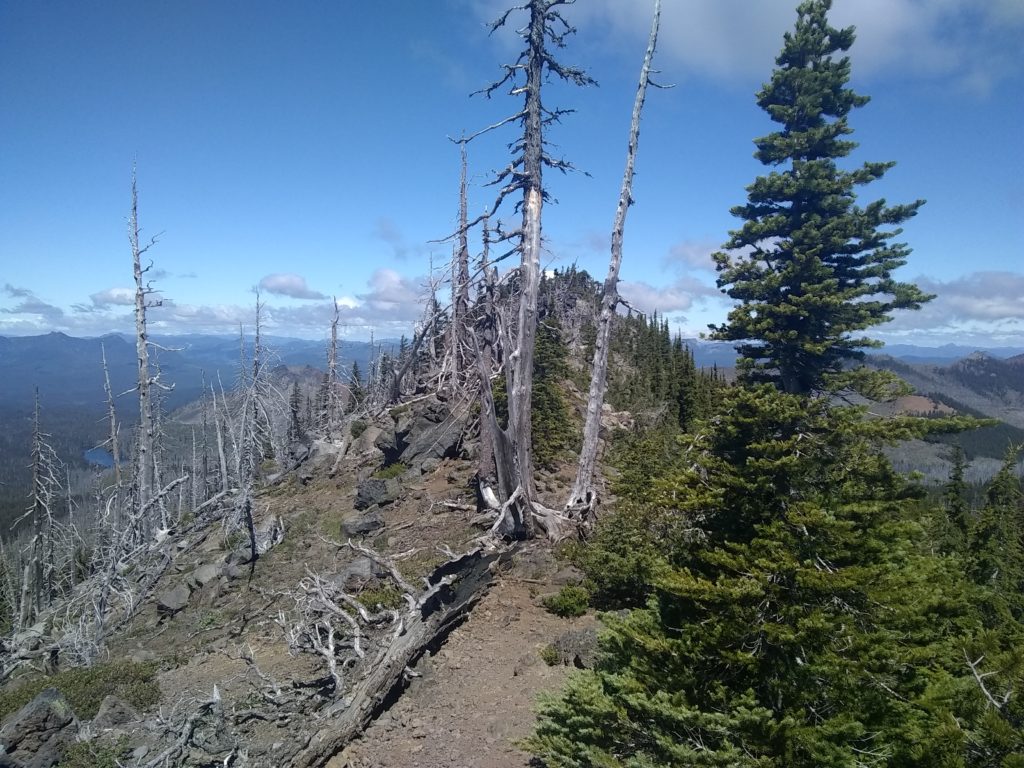 As we arrived at the top of the climb we found ourselves at crests in the mountain. It drops on both sides and we can see the range all around us. It was getting warm and there were many lakes below, just out of reach (or a lot out of reach). 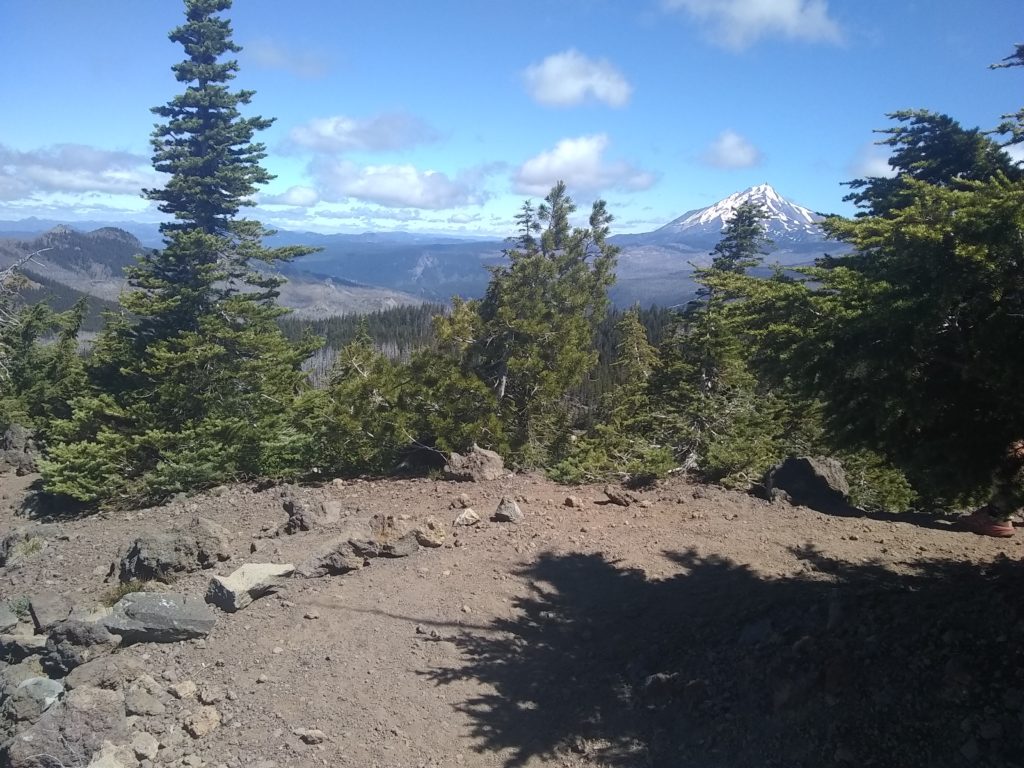 We began circling as we headed towards the back side of Three Fingered Jack. We were given different views and a few more packs of snow to make our way through.

The mountain changed as we wrapped around it. Long runs aren’t so mentally tiring when there is so much to look at. We continued to pass hikers and even a few other runners.

Finally making our way down to the lakes, we had opportunities to cool off from the summer sun. The lakes are clean and refreshing. We begin to pass them every couple of miles. As the miles begin to take their toll, they are a welcome sight. 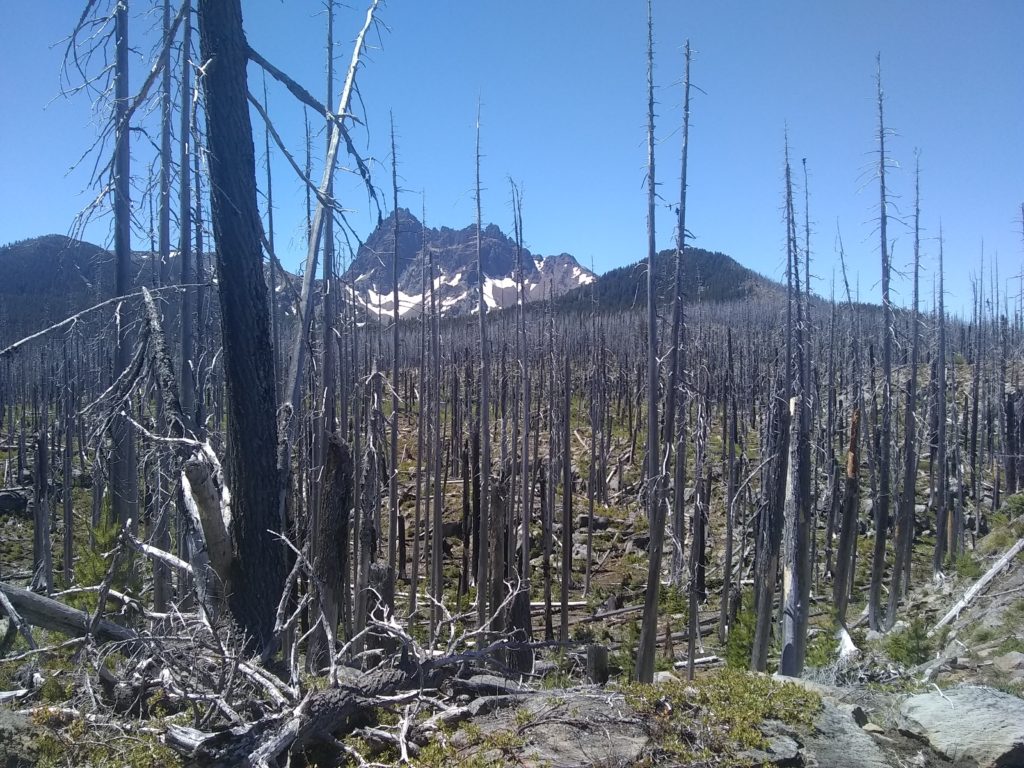 Even though we have so many miles left, we can look back and see what we had accomplished. The mountain feels so far away already, even though we were just on it. Now we pass through this once burned land that has new growth and life showing where ever it can grow. 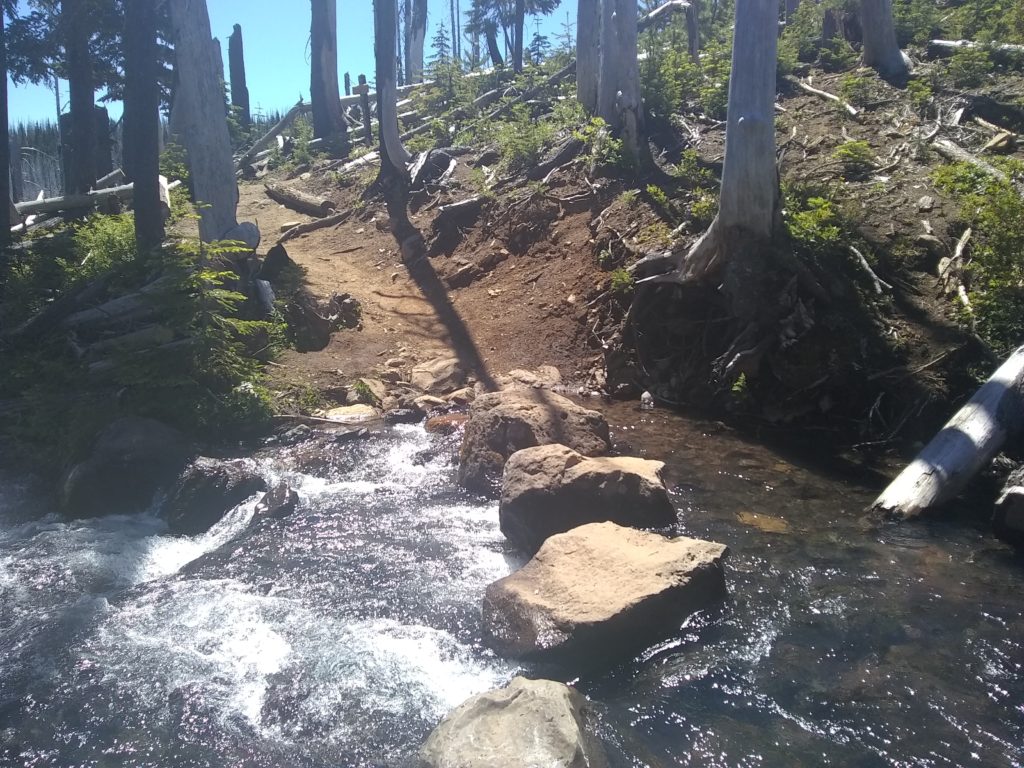 Stream crossings are my favorite. I can’t tell you why. After we cross this, we follow the river for some time and it is a nice change of scenery from the dry, rocky mountain. 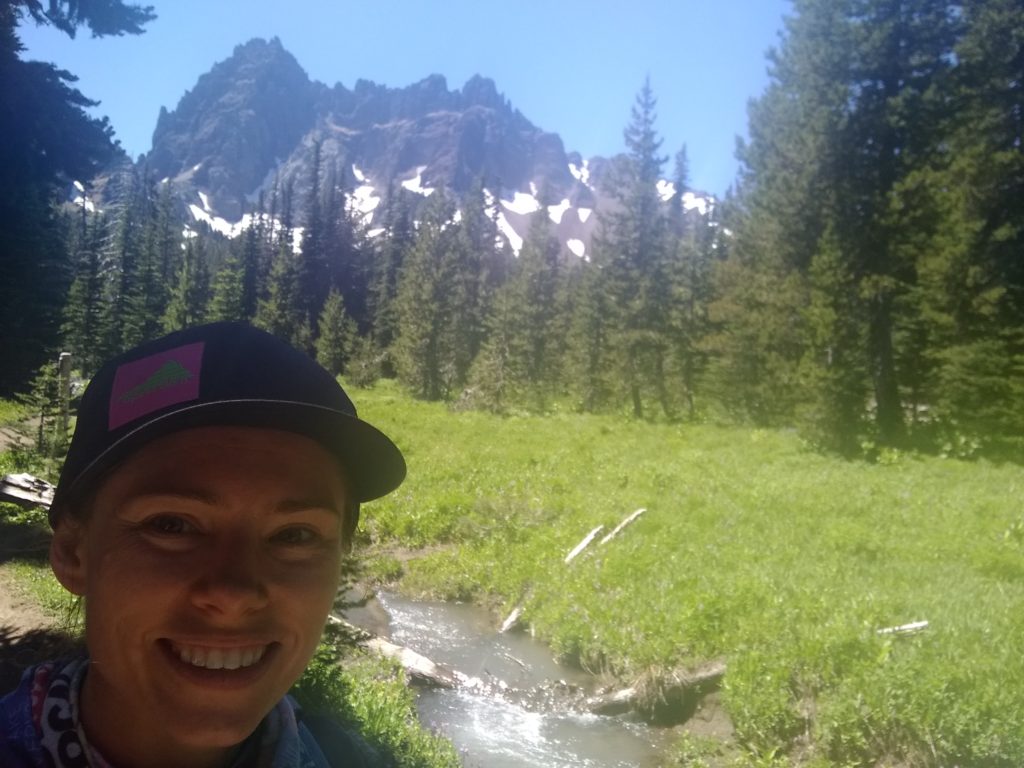 One last stop to enjoy the view and add to our water stores. After this moment we have a little longer to enjoy before the suck. 23.5 miles is a long way. We thought it was 22 and even talked to people that said 22. We passed a few more lakes, but much of the end was exposed and hot. We were ready to be done. The views were gone and it was just time to put our heads down and finish what we started.

Eventually (after what seemed like forever and a day) we arrived back at the parking lot. We did it. In roughly 5 hours we managed our way around an entire mountain. It was an incredible experience and a huge boost in confidence as to what my body can accomplish.

If I do this run again (which I probably will) I might go in the other direction for better motivation at the end of a long day. Overall this run felt really successful. It was a great adventure and an opportunity to see parts of nature that aren’t often explored.

Now to figure out what is next!