Looking back on it, I am not sure what all of the fuss was about. In the moment, I was scared. Now it is just an adventure and I am sure there will be crazier ones.

I was going to go for about a 15 mile run. The weather was supposed to be extra warm, so I thought I would head up to the mountains so I wouldn’t be too hot. Since recently discovering building routes on Caltopo and exporting them to Gaia, I made a loop to run. It was familiar and should be fun and scenic. Except I was wrong. It wasn’t the trail I thought and one small portion was slightly terrifying, but I’ll get to that later.

I thought I was going to run this alone, but a friend who had just gotten back from vacation sent a message asking what my plans were and decided to join me along with her husband. I sent them the plan for them to download to their phones and off we went. Her husband is faster and went ahead of us.

We began winding our way down a smooth path with a few gentle river crossings. There were some logs to hop over and it made me think about making some time to volunteer for trail maintenance. 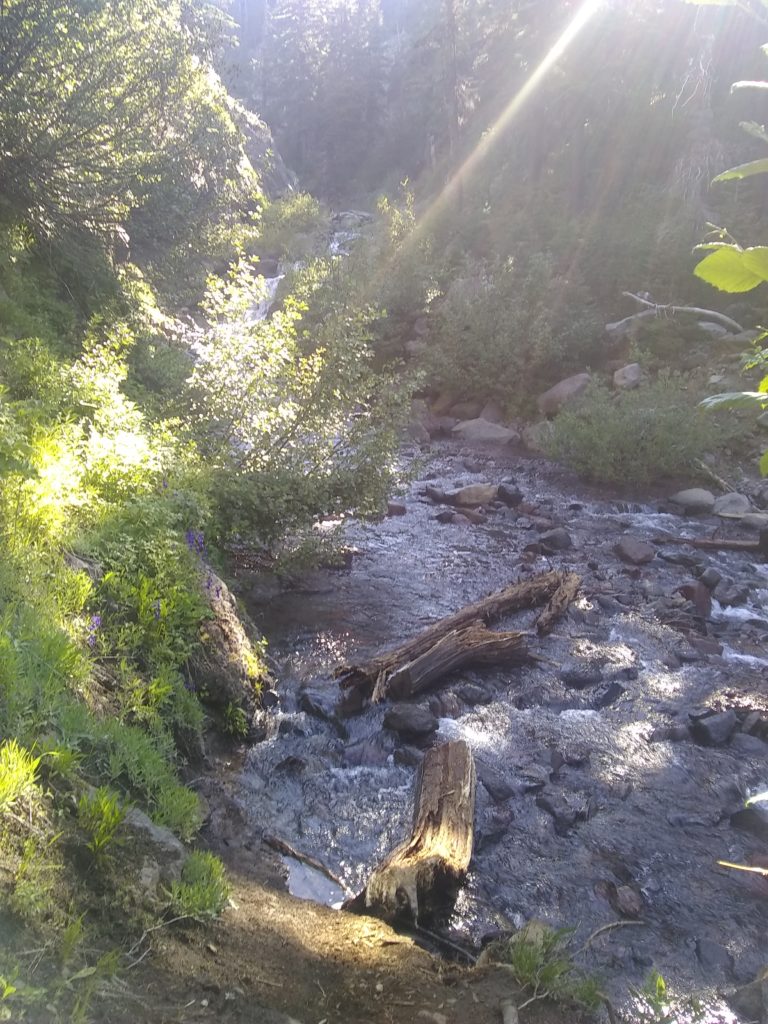 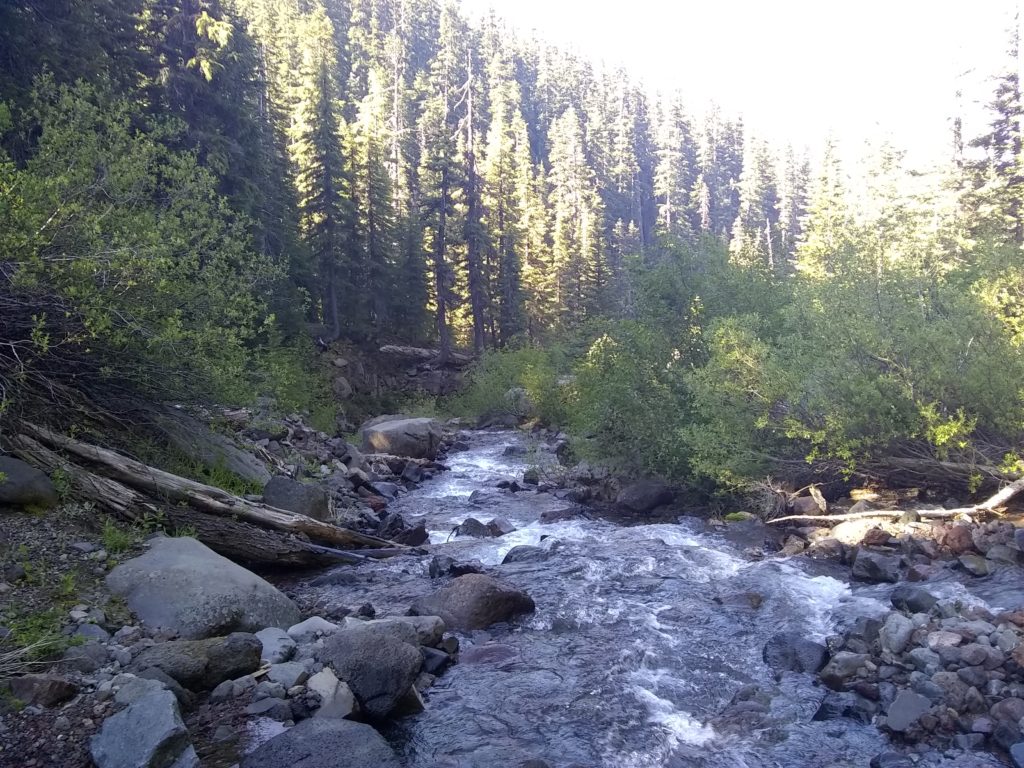 We began to climb a little and found ourselves on the kind of trail we see in photos and wish to be on ourselves. Just a thin single track on the side of a mountain with views that go on and on. Reaching places like this is part of what motivates me to get out there and seek new trails and adventures. 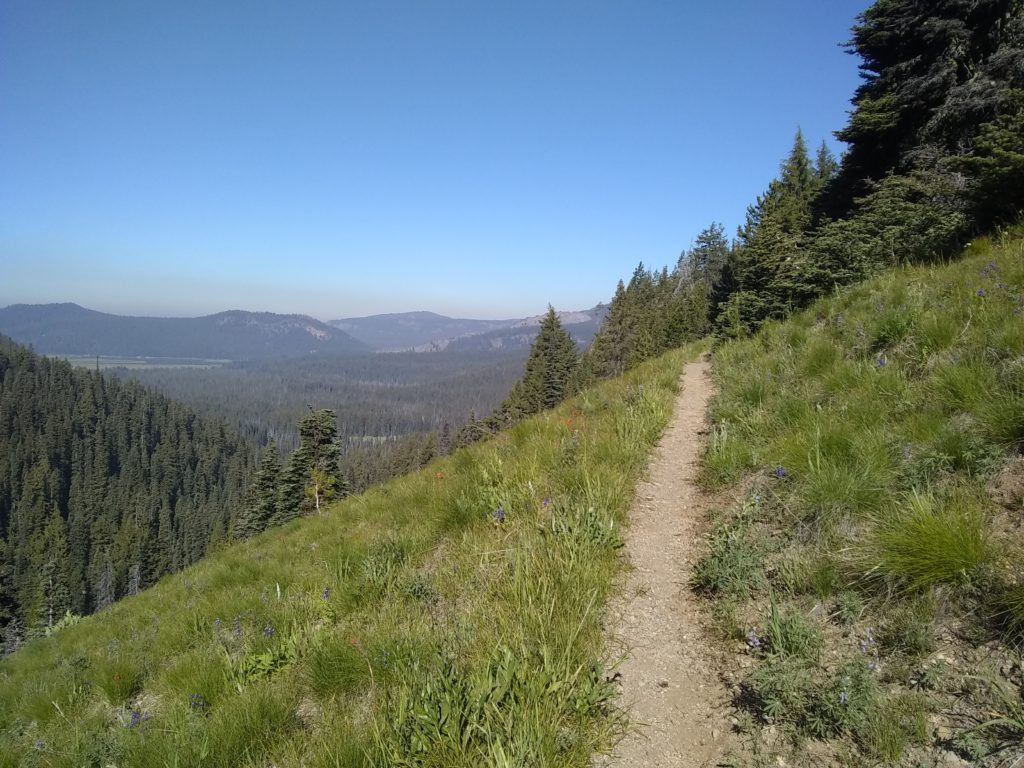 As we climbed we found patches of snow where the mosquitoes wait for their next victim. The temperature was slowly rising and the cool of the snow was welcome. 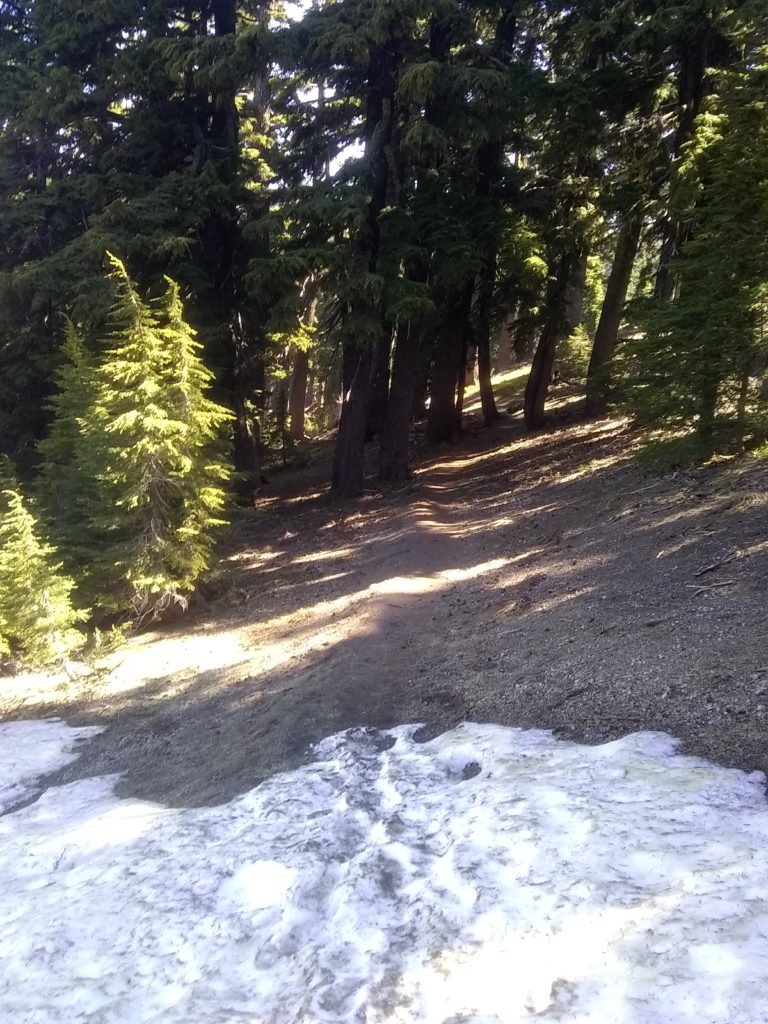 There were more creek crossings and some mountain meadows that make you want to sing and frolic through them. Except, we have a plan and a goal so there isn’t time for singing and frolicking. 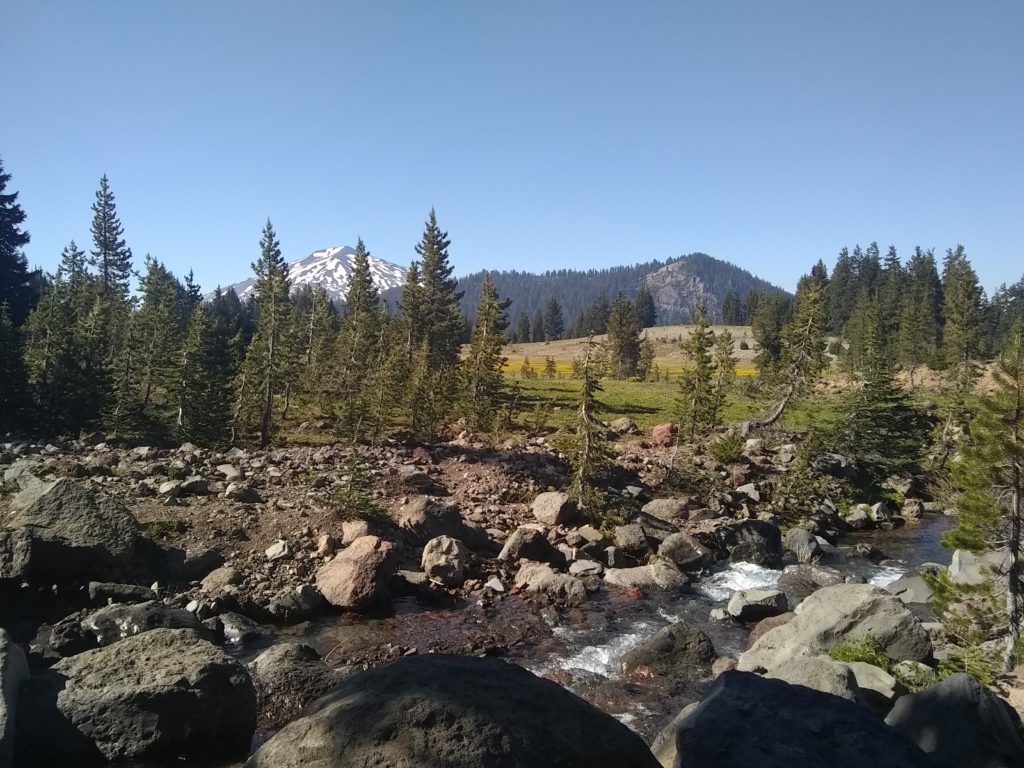 When we reached the lakes we were feeling great. It was perfect weather, a great pace, and we were just about halfway through. Now we could take a left and head back down the mountain at this point, sticking on a main trail. We would pick up speed and finish strong. But that would only be about 13 miles and I was looking for 15. Plus, I had my fancy red line on my phone that followed a trail. 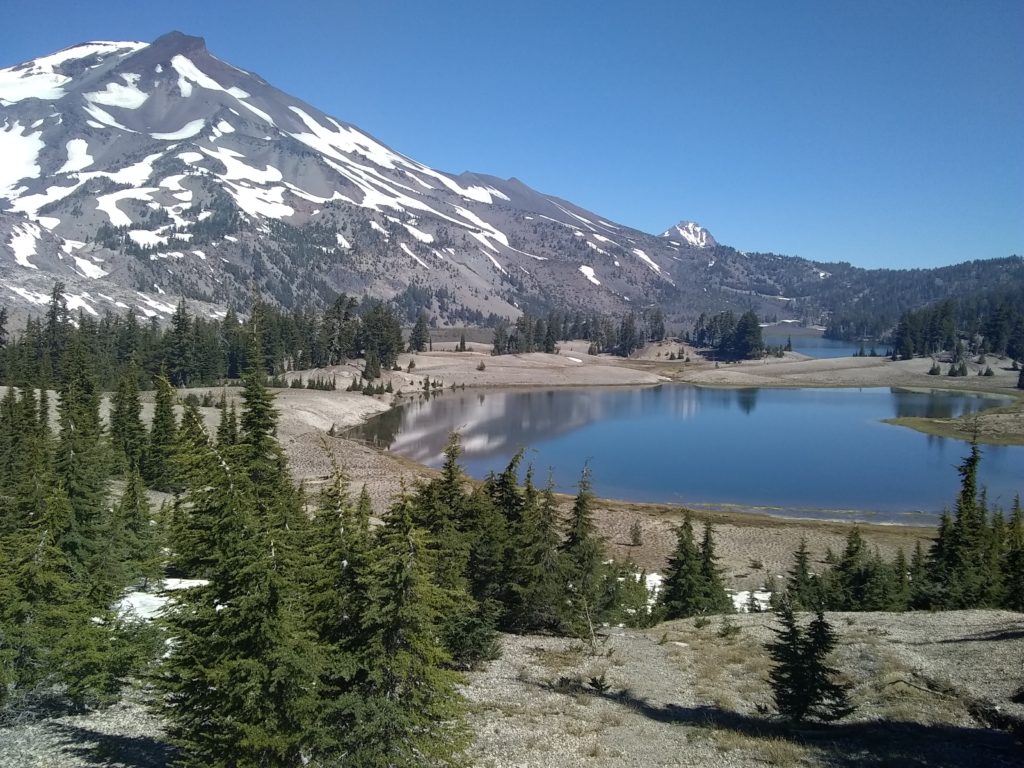 We stood at this mellow creek crossing and my friend checked her phone. Her husband was letting us know that the trail was getting a little intense. But, he kept going so we did the same. We decided to take our shoes off to cross the creek that leads out of the lake and dry off on the other side. There wasn’t a trail over there, but there was a trail marked on the topographical map. 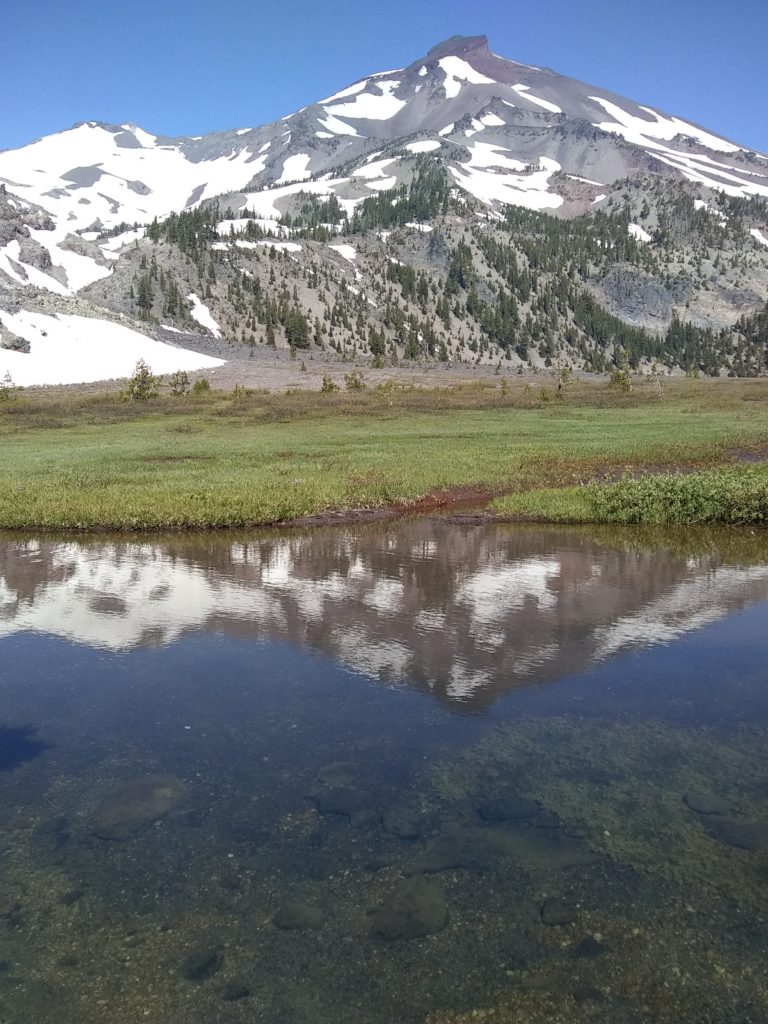 We climbed boulders, went around a waterfall, and started doing something that felt extra adventurous. We were looking up the line and just weren’t sure how to proceed. My friend called her husband and asked if we should turn around and take the other trail. He said once we were past this part, it was doable. We should have turned around, but he did it and if we didn’t go, we never would have known. So up we went. Up to the dip in between the two points. The last part was pretty steep. 1000 foot climb up in the snow. We could see some people on the rocks with their trekking poles, crampons, and hiking packs. We were in running shoes, tank tops, and shorts. Nothing more than a hydration vest. 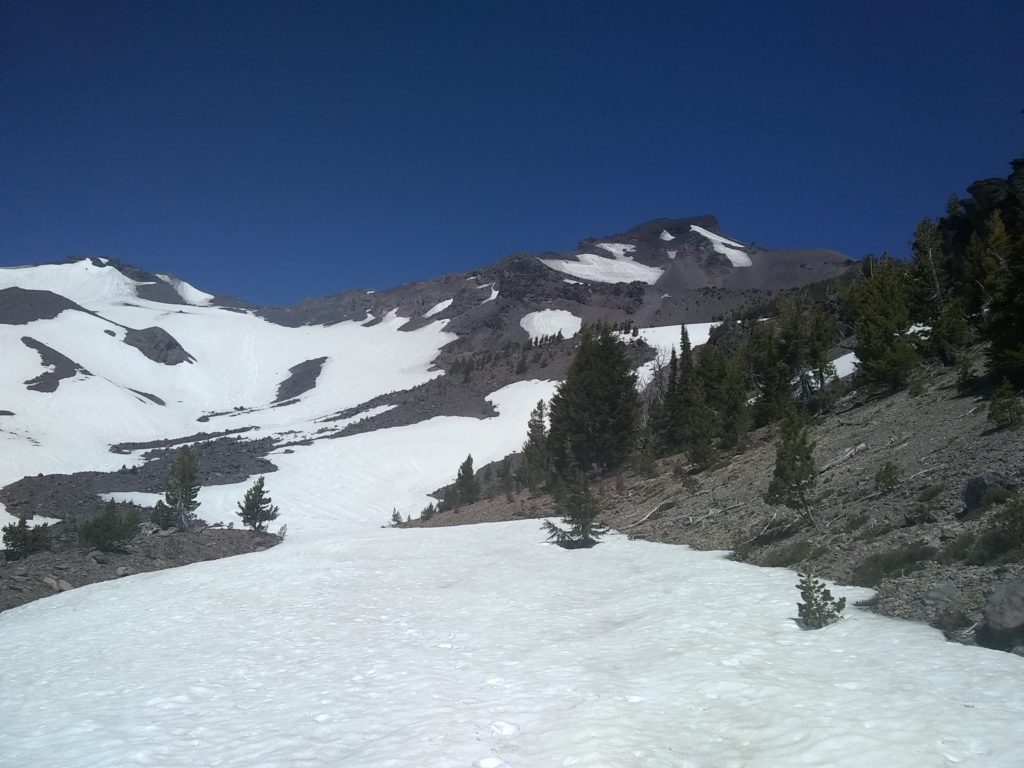 The more we climbed up the snow, the more we knew every step mattered. If we slipped, it could be bad. It was steep and so high. We reached a point where it was better to finish than to turn back. We didn’t know what would be waiting for us on the other side. Would it be more of the same except going down? I knew a main trail waited for us, but I had never been on it before. 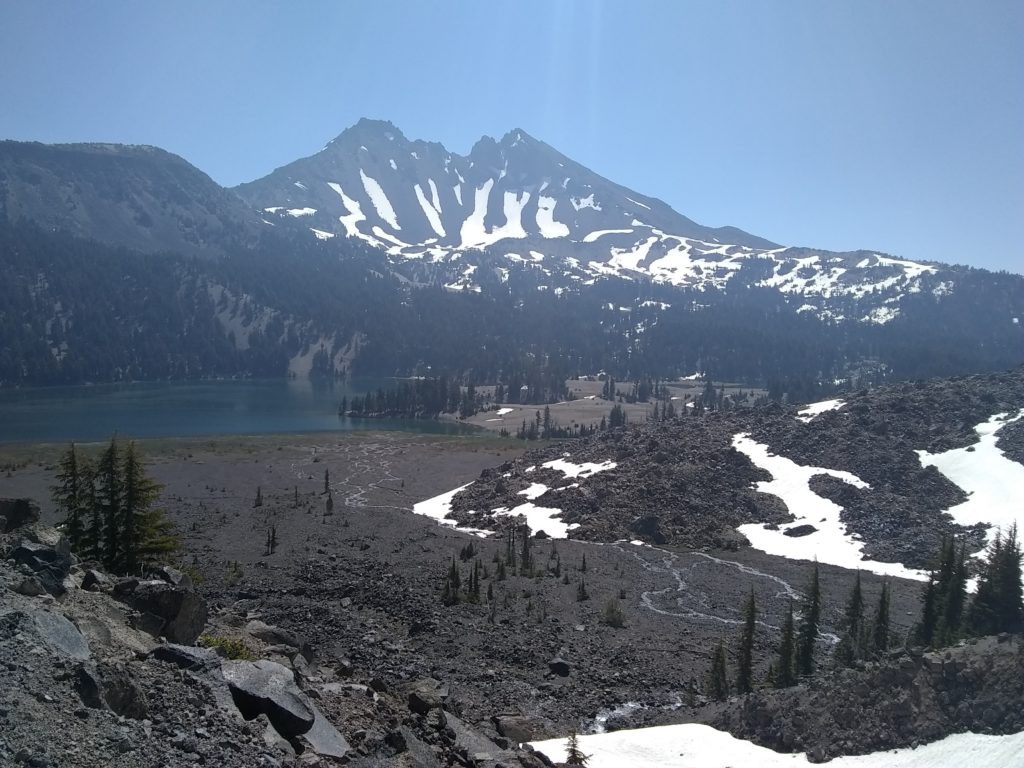 When we finally reached the top there was a lake on the other side…and people. My photos end, because I was done. I just wanted to be done. I look back on it fondly, wondering what I might get myself into next. In the moment though, it wasn’t fun anymore. We still had a considerable run to finish and it was getting warm. We had reapplied sunscreen, but the sun was beating on us for over an hour on the snow and the rest of the way is looking exposed. 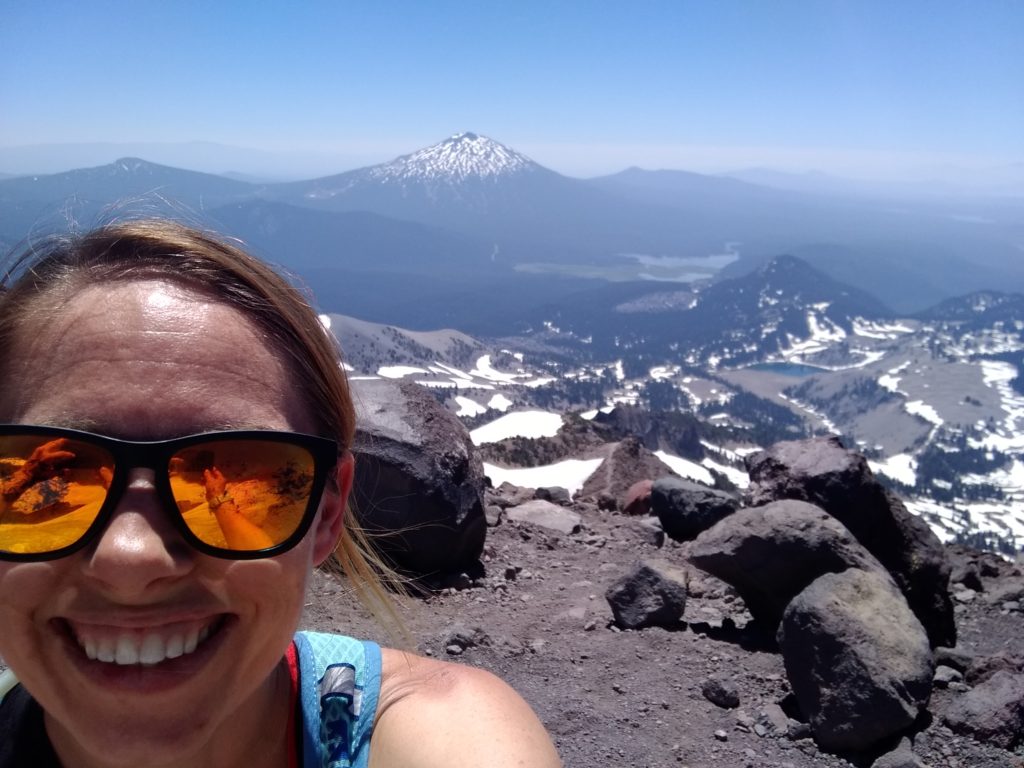 In the end the 15 ish miles turned into 16.5 somehow and included just over 4,000 feet of elevation gain. A good portion of that elevation gain was just in the one mile. The simple run turned into an all day mountain adventure. The hardest part was knowing that I had planned for 22 miles the next week. Another crazy mountain adventure nonetheless.

I ended up with an awful sunburn, a giant blister, a couple of gashes to my ankle, and some very sore muscles. But good memories. I was mostly worried that my friends would be upset since they hadn’t planned to be gone all day and had just returned from vacation the night before, but luckily they love a good adventure!