Where should I start? I could start the day of the race, I could start at training, or I could start somewhere in the middle. I guess an introduction is in order. I recently finished the Bigfoot 20 miler at Mt. St. Helens. It is the shortest event for the Bigfoot, which includes a 40 miler, 100k, and 200 miler. Bigfoot is put on by Destination Trail, run by Candace Burt, who is known for being the queen of the 200 mile event.

I thought about this event on and off for a while. At first I thought it was too technical for me. I didn’t know anything about getting myself safely around the mountains. But then I learned. I hadn’t run 20 miles before or had to navigate a mountain. But, I learned a few things and found my way to signing up.

Training was natural. Everything that I needed to do, I was doing anyway. Because summer is a great time for mountain adventures I was able to get elevation training and hill training in. I even toyed with the idea of changing to the 40 mile race, but I am not there…yet.

Three and a half weeks before the event I caught a cold. Not a big deal, I had done all of the running I really needed to do. But this cold kicked my butt and then kicked it some more. I coughed so hard that I eventually injured my ribs. I hoped for healing and very slowly was getting better. Unfortunately, I was also trying to get a new job and needed to be training as part of an interview process. The morning we were leaving for Mt. St. Helens, the day before the race, I felt a pop. It was bad. I made my way home and we debated on going to urgent care, but I just wanted to leave town.

We had a 4.5 hour drive and the halfway point was Hood River. I was in so much pain we stopped at a doctor when we got to Hood River to make sure nothing was broken. He said I tore muscle in between my ribs and gave me a prescription for an anti-inflammatory and told me to sleep with a heating pad. I just didn’t know if I should try the race.

Bigfoot is 20 miles with 4,000 feet of elevation gain. There is one aid station at 8 miles and after that there isn’t really any turning back. If I did the event, I needed to be able to finish it.

I really couldn’t decide if I was grateful that my injury wasn’t from running or annoyed. The good news was that it wasn’t my knee or ankle. Running wasn’t going to make it worse, so it came down to pain. When I woke up in the morning it hurt, but not as much and I knew in my heart I couldn’t back out. I readied my things and watched the other runners doing the same. 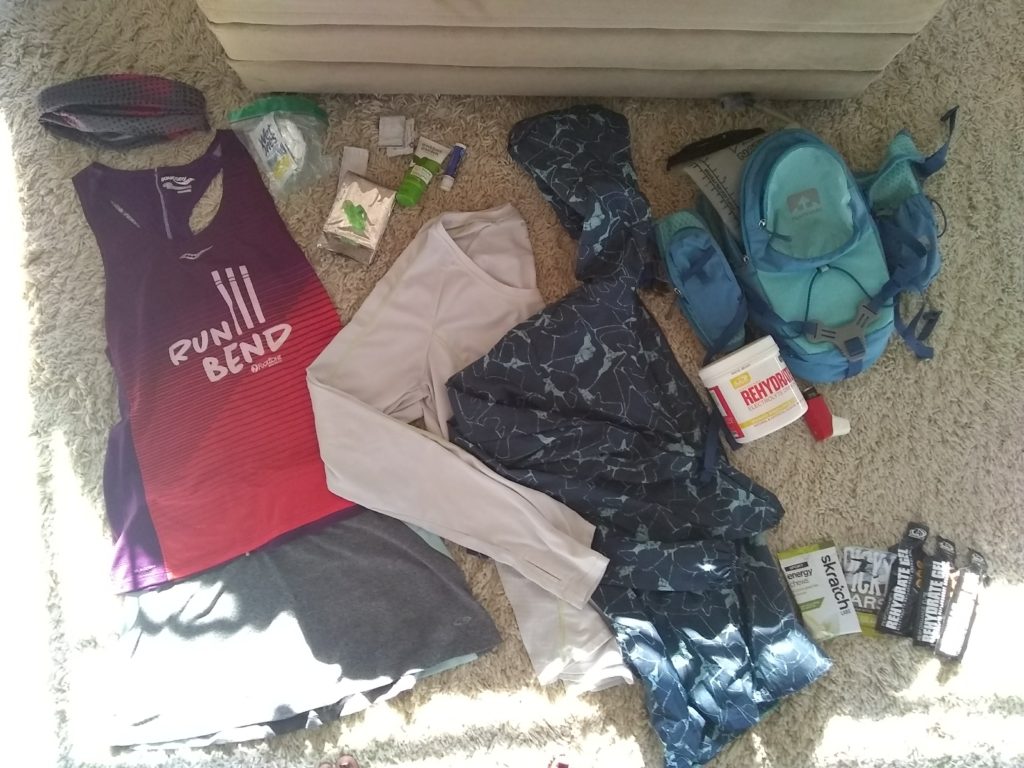 I realize that I am forgetting an important topic here: Camping at the race start! We got there just in time to catch the end of the space in the sno park lot. There should have been enough room for everyone, but there was some construction the race staff wasn’t told about and part of the lot was closed. It is in the forest, so there is space, but we hoped to be near the start so we could easily go back and forth. Our wish came true! It just made race life a tad bit simpler. 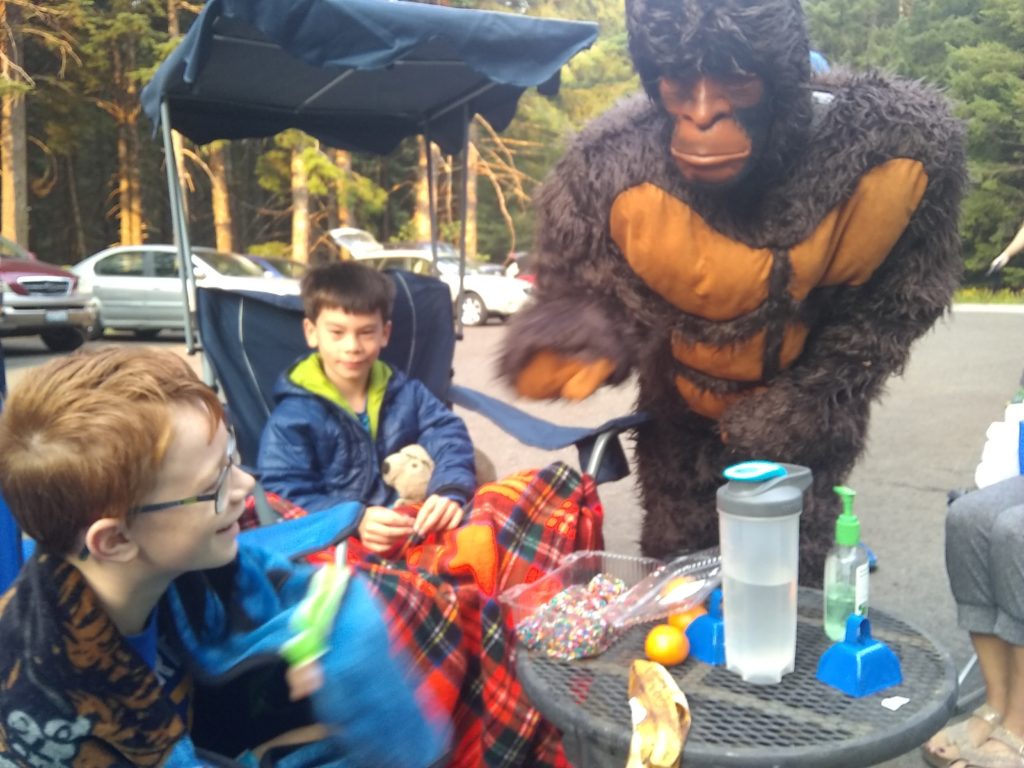 Anyway, back to race morning. I decided to race. My brother came to race too and we gathered at the start ready to go. Well, that is simplifying it. There were 2 pit toilets, 3 porta potties, and a few hundred people between the different events. So I spent the moments leading up to the event in line for the quickly overflowing honey buckets. But, I managed to get through the line before the race started. #winning 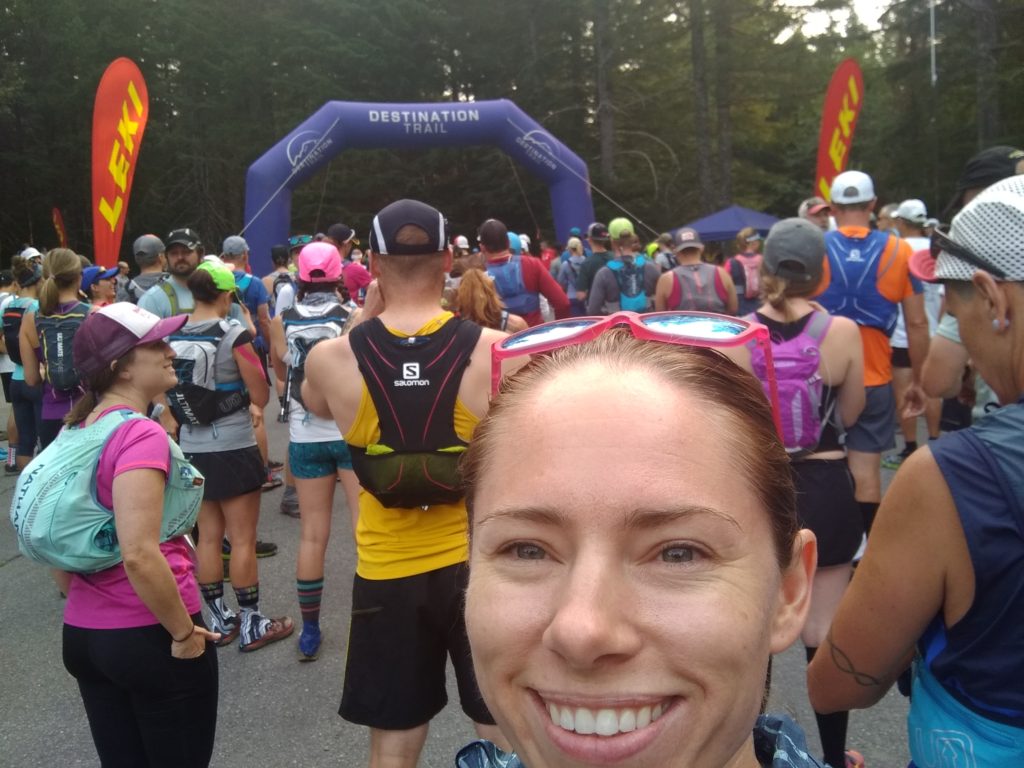 Off we went. Slowly climbing up snowmobiling roads that turned into single track that turned into dry creek beds that turned into bushwhacking (cause that one part definitely wasn’t even a trail). I spent the first few miles running and chatting with my brother, then slowly got ahead of him as we climbed and descended small hills. 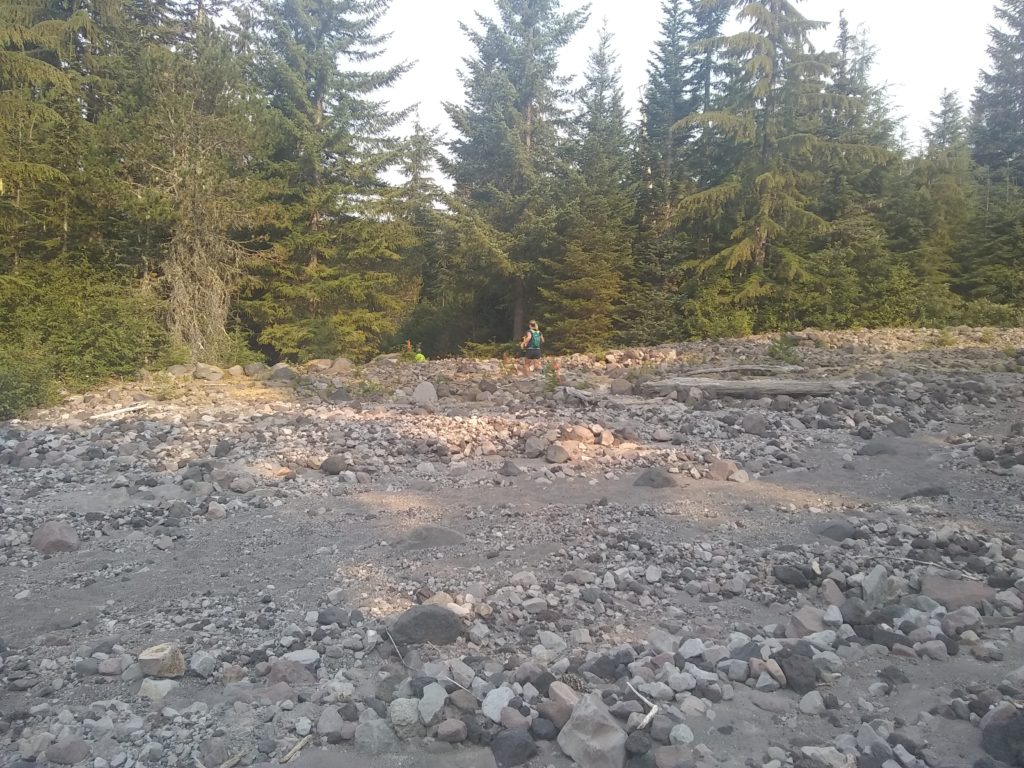 At 8 miles I came up to the one and only aid station and it was a party. Water jugs as far as the eye can see, drop bags for miles, and all kinds of food and beverages. I was in and out though. My water supply was still pretty full (should have filled it to the brim though) and I didn’t see any food that I wanted and could eat (gluten-free). As I was leaving the aid station, my brother was heading in. I thought about waiting for him, but my sore rib told me the quicker I can finish the better, so off I went.

The course changes after this because I began passing the 40 milers and later the 200 milers. It made time go by faster with all of the nice works and good jobs flying around. There were some sections where I feared falling off a cliff when people passed, but seeing Catra Corbett made up for all of it! Anyway, I climbed and climbed and climbed. There was encouragement and also grumbles. I mean when do we get to the top? At one point I looked way up above me and saw people knowing that was my fate. It was some solid fast hiking. 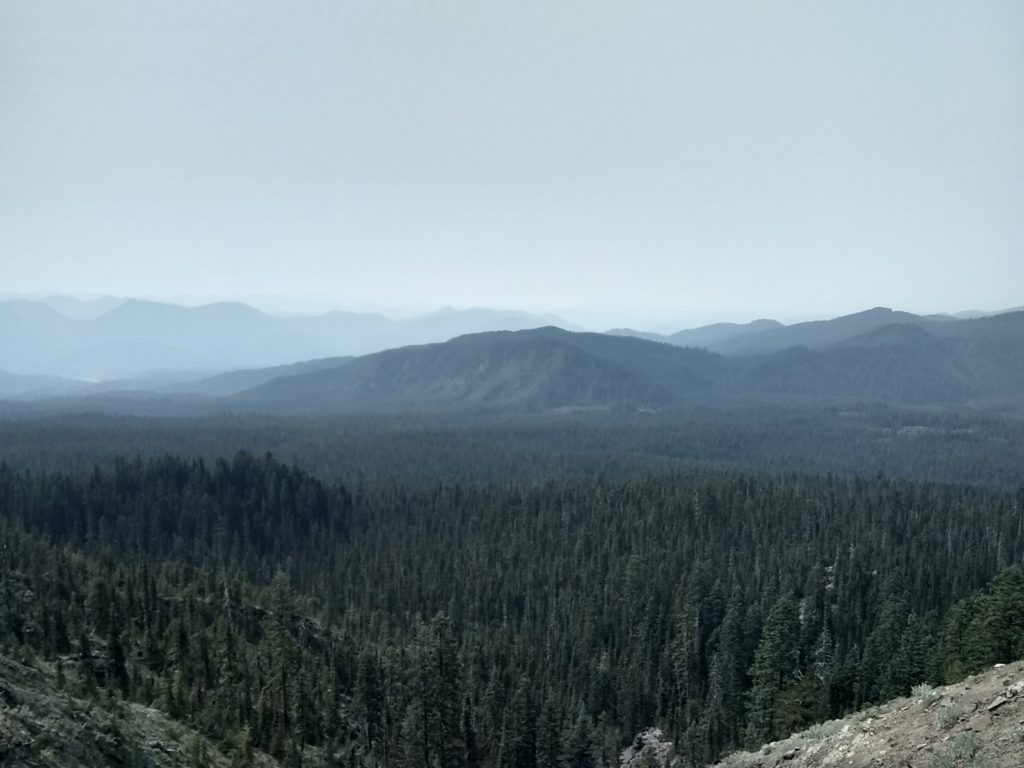 The views at the top were amazing. I stopped for a moment to take it in. The calm before the boulder field storm. I began the traverse across the boulder fields with the top of Mt. St. Helens seemingly in reach. It was fun in some ways, but just difficult in others. At one point there weren’t any other people around. The field had spread out, but there were always others and suddenly there weren’t. I had gotten off course. Even though I had all of the tools I needed, it was slightly terrifying. It took me a few minutes to figure out how to get back and where I went wrong. Eventually, I saw someone and new I was getting close. Then I spotted the pretty pink flags. Pink flags have never looked so good. Off I went being very watchful of those flags for the rest of the run. 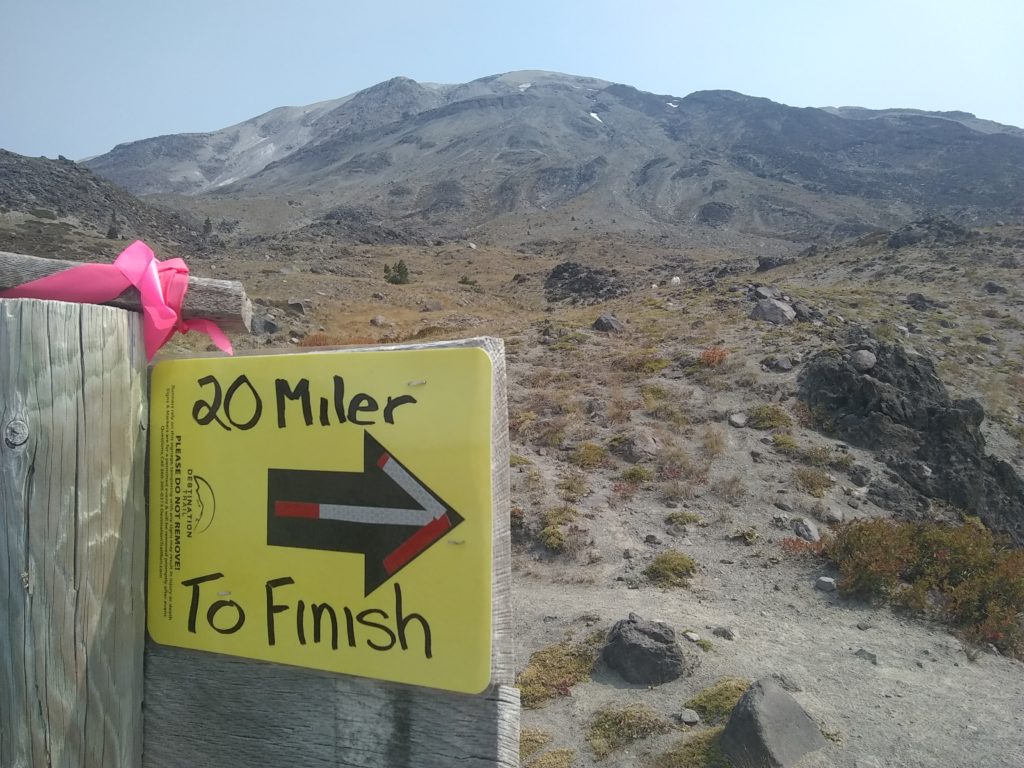 I haven’t mentioned yet, that it was really hot. So hot. At 15 miles I started to worry about my water supply. I began to ration, but was pretty thirsty. The creek beds were dry and there was no water to be found. It would be okay, but when there were just 3-4 miles left, there it was. Water! A creek , a beautiful, amazing, incredible creek. Filled with weird, gray water. But, I had decided on some extra precautions and had a filter. That water gave me just what I needed to finish the race. I might have gotten a side cramp on the downhill from too much water, but it was better than wishing for more. 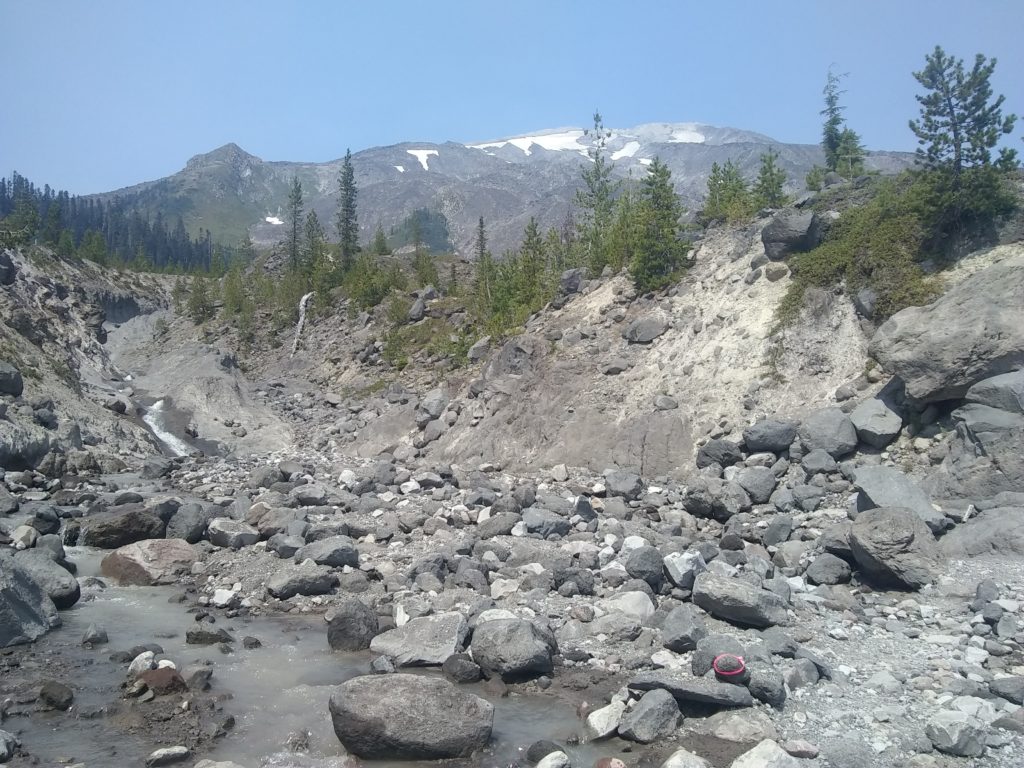 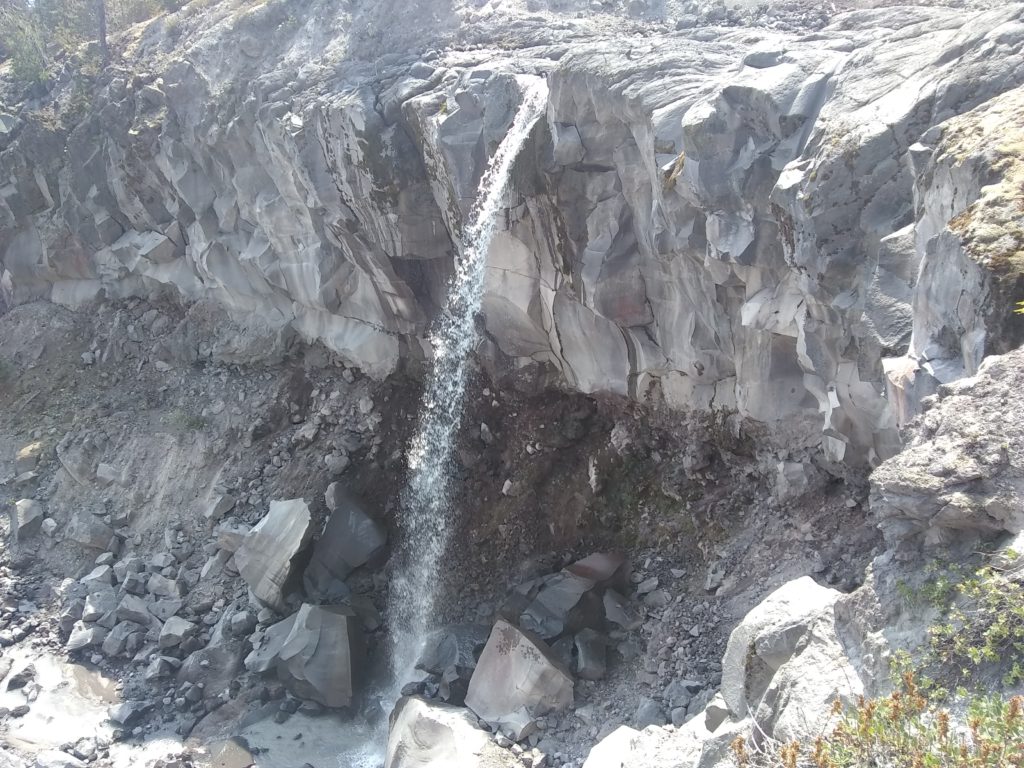 Eventually I made my way to the finish line. My family was waiting and cheering me on. Not only had they brought a camp chair for me to sit in, but they brought the beautiful shade tent. I drank Tailwind, lemonade, coke, and then lots of water. Really it was more fluids in a day than I can remember. I rested as we waited for my brother to cross the finish. He came through a little while after me and we relaxed for a bit enjoying the finish line environment. 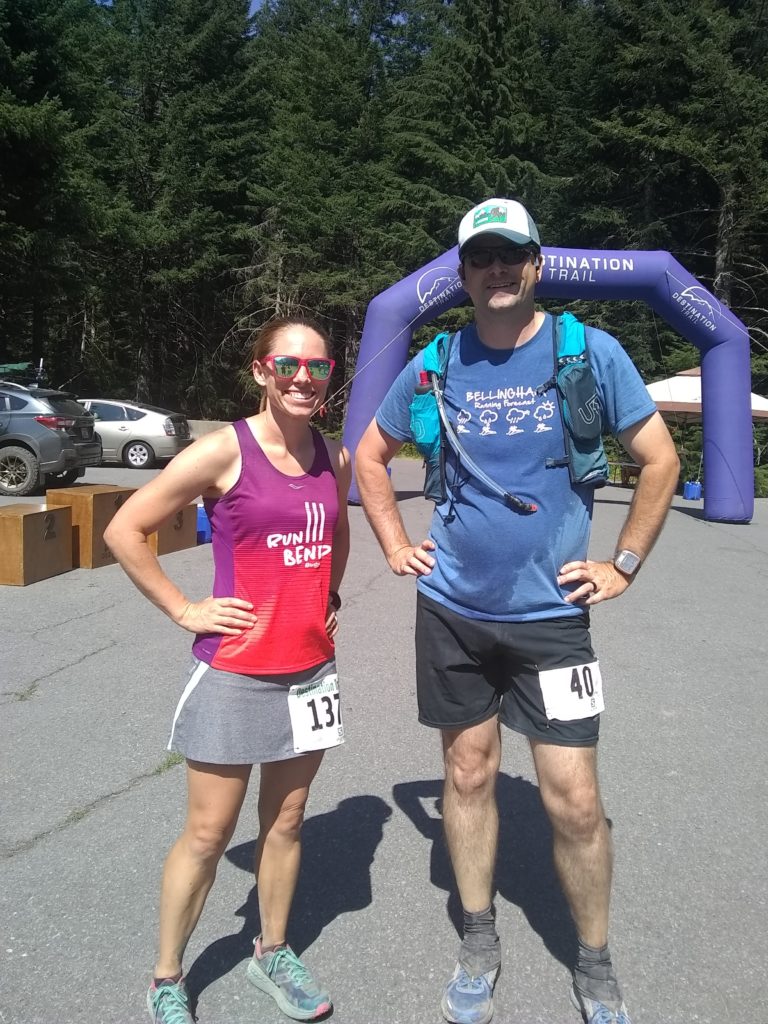 After a while we went to the small nearby town to play at the lake and get burgers. Long runs always call for burgers.

It was a great race. At the end I wasn’t sure I would do it again, but just a day later I was considering strategies to do better next time. I finished ahead of middle overall and 8th in my age group. I was happy with it considering my side hurt pretty bad for the last 5 miles. Maybe I’ll do it again next year, maybe the 40 miler, or maybe other adventures will come up.

Bigfoot is a really different kind of race. It isn’t just running, because it is technical. It was hard, but I wasn’t sore the way I would be for a long run. There was a lot of mental energy involved. So, if you like that sort of thing I definitely recommend it.